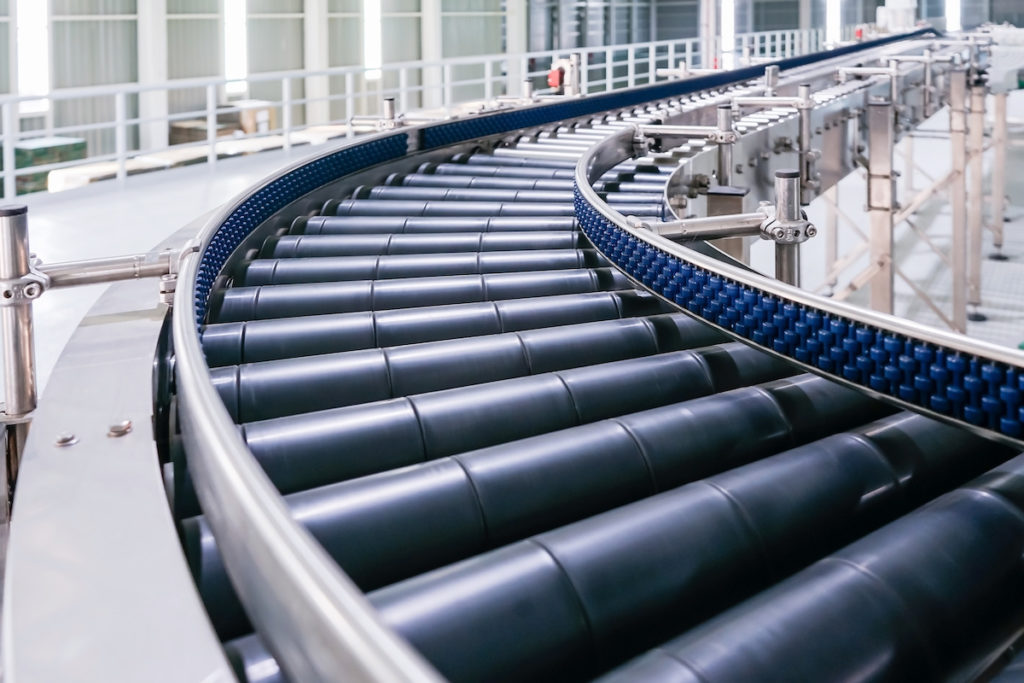 Most people might not realize that a big percentage of materials they buy or consume that are constructed of metal, food, cosmetics, medical supplies, and plastics, make use of conveyors. Conveyors are mostly used to move large and bulk materials across distances. When it comes to the factory setting, conveyor belts are used to transport part of the material from one side of the factory to the other and to improve efficiency and decrease workload. Today, they are important in a variety of industries from quarrying, mining, and mineral processing. Conveyors come in all shapes and sizes and are used in different stages of production depending on the industry and the size of the plant. This aspect of the production assembly line has become integral and essential for many automated facilities and applications, particularly those that deal with heavy machinery or materials.

The concept of the conveyor belt began way before the industrial revolution when it was used by farmers in the late 1700s to assist in moving large items across distances. This is why the invention of the conveyor is not exactly credited to one sole person or inventor. The concept was used by many across industries and before mass production. Henry Ford is often credited with the technology, as he implemented it in his early automobile plants, but Ford only took an existing idea and improved on it. In fact, it was Ransom Eli Olds, founder of Oldsmobile, that patented the design for a continuous assembly line, which is often credited to Ford as well. The early conveyor belts were more than likely used in agriculture and often made with a wooden framework with belts made of rubber or leather.

The term continuous production is an industry term used especially in the 20th century to refer to a workplace setting defined when technology is used to define the sequence. Conveyor belts are simply part of a continuous production process that entails transporting materials from one production station to the next. In the Ford plants, for example, where early use of conveyor belts helped build the famous Model-Ts led to an extraordinary reduction of time that it took to build the models; the time went from 12 and a half hours down to one hour and 33 minutes. The conveyor belt has to be perfectly timed and coordinated in order to keep the production line in order, but once it was perfected, the efficiency and labor it saved were undeniable.

These aspects of factories began with a simple design and were used to transport sacks of grains or other heavy materials across distances simply to save labor. As the Industrial Revolution took hold in Great Britain, the implementation of the combustion engine and the steam engine continued to improve production. The conveyor was a part of this, as they no longer had to be hand-cranked and made the operation flow more easily. The first steam-operated conveyor was put into use by the British Navy. In fact, the British Navy used this incredibly powerful invention not to load important machinery or weapons or ship materials but to load up biscuits for sailors! These conveyor belts began appearing throughout all industries and would soon be part of the mining industries as well.

With the invention of Vulcanized rubber, the materials for belts would be much more adaptable and sturdy, and once the underground conveyor belt was built, mining and quarrying would be completely revolutionized. Suddenly, much more material could be moved from the extraction point without that much labor. In 1908, the first roller conveyor came into the scene, and with the advent of automobiles and the demand slowly growing, conveyors became instrumental in the assembly of automobiles.

The conveyor continued as an essential part of factory and production and became even more vital as the war broke out. Conveyor belts were used throughout America when producing essential war-time materials. The shortage of rubber also forced the invention of synthetic materials to be used for the belts and made the production that much more efficient. The booming economy after the war also led to mass production of many goods and the conveyor played a major role in being able to keep up with production demands.

With advancements in robotics and computerization, the conveyor belt has taken on even more responsibility. They are essential to the mining and quarrying industries, as well as production for many goods we consume.

When your conveyor breaks or malfunctions, the entire operation can be put to a halt. This is why it is important to have conveyor repair you can trust to do the job quickly and efficiently. Here at Wyler Industrial, we know the stakes are high. Our mechanical repair includes repair for conveyors and other industrial operations. Call us today and keep your operation running.